Paulie Malignaggi & Conor McGregor – We Need To Talk about That NDA 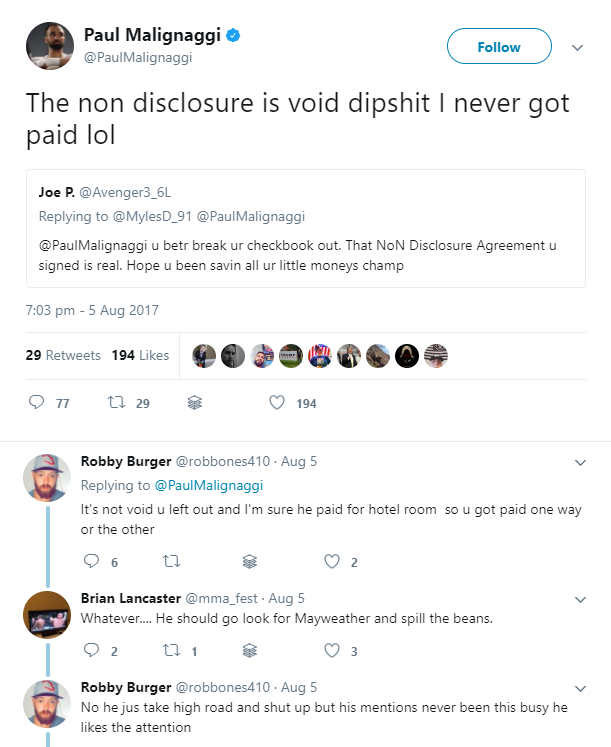 So, the McMcGregor Malignaggi NDA is all anybody is (not) talking about.

If you’re a fan of boxing, or MMA or both, you’ve no doubt heard about the big spat between Conor McGregor and former sparring partner (and former boxing world champion) Paulie Malignaggi?

“I told Conor that it becomes very hard for me to not disclose the NDA that I have when you’re putting up pictures of me.”

SO, what is this mythical NDA and what’s in it?

An NDA is a ‘Non-Disclosure Agreement” and, as the name suggests, it binds a party or parties not to disclose certain things specified in the agreement.

So far so simple.

However, there’s a couple of issues with NDAs generally, and with this one specifically that are worth pause for thought.

The First Rule of NDAs…

Firstly, to paraphrase Fight Club, the first rule of Non-Disclosure Agreements, you do not talk about the non-disclosure agreement. It would be a pretty standard clause in any NDA that I draft that one of the things that cannot be disclosed is the fact of the existence of the NDA or the terms of it. If that isn’t in this agreement between McGregor and Malignaggi, it’s quite surprising. If it is, then that provision is already breached in revealing the existence of the NDA and/or discussing its terms.

When is an NDA not an NDA…

Almost all standard NDAs will allow either party to disclose the terms of the NDA to a ‘professional advisor’. For example, here’s the wording I used in an DNA drafted for a client last week:

All Confidential Information shall be kept strictly confidential by the Parties and shall not be disclosed in whole or in part to any person other than:-

Provided that the Parties, prior to disclosing any Confidential Information in accordance with this provision, shall procure that each of those directors, employees and professional advisers and other such persons to whom Confidential Information is to be disclosed is made aware of and shall adhere to the terms of this Agreement as if he/she was a Party to it in place of the Party so disclosing.

So, If Paulie Malignaggi wants to hire me as a professional advisor (please do Paulie, mates rates), then he can send me on a copy of the NDA.

Who Breached The NDA First…

According to Paulie Malignaggi, he never got paid

If this is true, then he’s quite possibly has a point. Whether it’s void or voidable or whether it has been ‘breached’ is another matter.

Again, a standard clause in any contract (which is what an NDA is, more on that in a second) would be severability. Here’s my standard bit:

If any provision of this Agreement (or part of any provision) is found by any court or other authority of competent jurisdiction to be invalid, illegal or unenforceable, that provision or part-provision shall, to the extent required, be deemed not to form part of this Agreement, and the validity and enforceability of the other provisions of the agreement shall not be affected.

But if the consideration here was ‘being paid’ (which let’s assume it was) then the contract may be deemed void or rescinded because the main object and specific purpose of the contract has been breached.

“I agreed not to talk to people about x, y and z on condition that you paid me $$$, you haven’t paid me, so I’m not bound and I can talk about whatever I want. Bitch*”

At its heart an NDA is a contract.

For a contract to exist there has to be 3 things

Consideration is what we would usually expect to be cold hard cash, but it doesn’t have to be.

Consideration could be anything, provided it is of value to all parties to the contract

Consideration can also be token, so in exchange for $1 or something

Often ‘consideration’, particularly if nominal, doesn’t actually change hands. This is a technical breach of the contract.

Here’s the crux of it.

(1) If Paulie Malignaggi really hasn’t been paid, and really isn’t bound by the terms of this NDA, why isn’t he spilling all the beans?

(2) If Conor McGregor really believes that he is bound, why aren’t his legal team seeking an immediate injunction to Paulie Malignaggi to comply with the terms of the NDA and restrain him from breaching its terms on social media, in interviews and otherwise.

As it stands, there’s a sort of weird situation where it seems Paulie Malignaggi appears to be SORT of breaching (what we can only assume) are the terms of the NDA, but for some reason isnt fully breaching the terms…….and Conor McGregor seems to be happy to let him.

What the reality is, we may never know, because if the NDA has been drafted properly, it will last beyond the fight anyway, as there should also be a term in there about the obligations surviving into the future.

From a legal point of view, something about this whole situation is not quite right, and I would LOVE to know what it is.