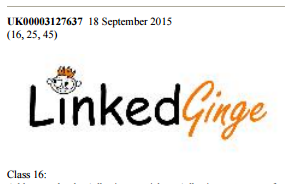 Every Friday the UK Trade Mark Office publishes its Official Journal. Here’s the pick of this weeks applications (Friday 09 October 2015): 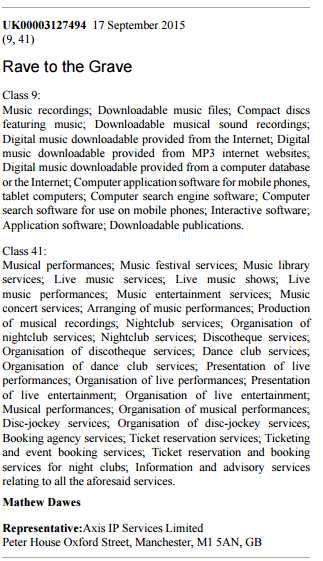 Followed closely in second place by this, which is pure genius not just because of the name of the Trade Mark applied for (in the context of the product) but also for the name of the company applying for it: 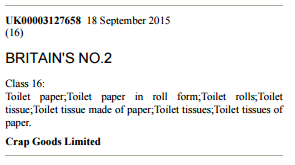 Does this ‘b’ look familiar to anybody else? Because it has nothing to do with a social network you may have been a memeber of as a teenager!

Waterford Irish Whiskey Is travelling across the water it seems: 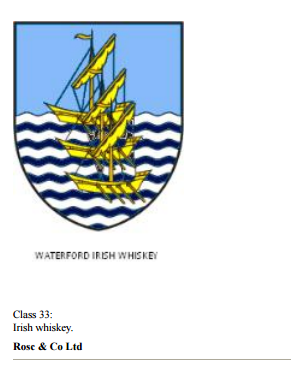 Making Tins of metal are we? Need a clever name that’s a pun and plan on words do we? Tinvitation it is.

The Rack pack is mostly notable because it was applied for by entertainment Giant ‘Endemol’, and on further Goggling, it’s the first feature film created specifically for BBC iPlayer, and it’s produced by Endemol. It’s about snooker by the way 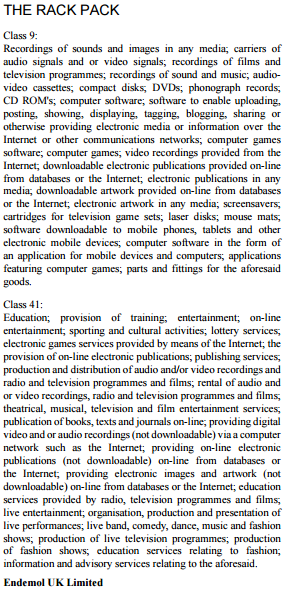 Bow down before the Ministry of Feline Overlords…Me-Ow. 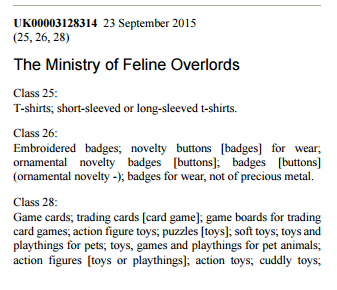 This is interesting. Someone has applied to register the Talbot Trade Mark, as in the now defunt car maker. That’s their exact logo. I don’t think this means Talbot Cars are making a comeback or anything, but rather perhaps the Trade Mark for the brand had lapsed (because they no longer make them) and someone has taken the opportunity to snap it up? That’s a guess now to be fair. 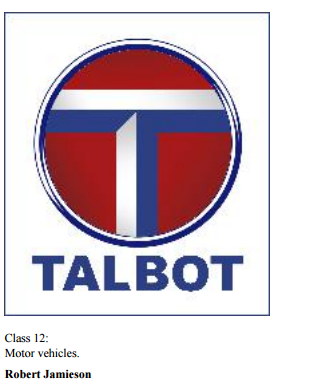 As a relatively new father, the more technology you can squeeze into a cot the better! Take my money now… 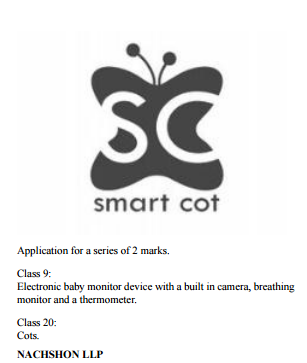 I wonder if Snoop Dogg would take issue with people using his weird form of language thusly? Fo’ Shizzle Shadizzle. 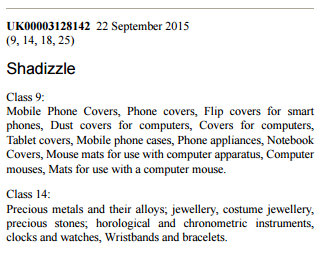 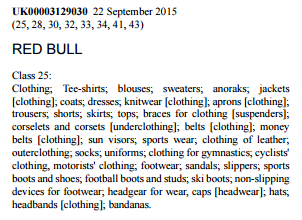 Calling All Band Geeks (I used to be one, so I say it as a term of affection)….if you are a brass instrument player, then why not pick up some ‘brass finger buttons with semi-precious stone inserts’ or what not, and Pimp Your Horn: 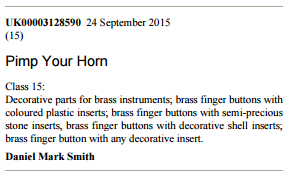 Wanna come over to mine for a few Keiths? 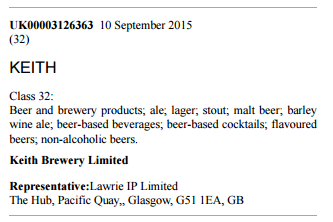 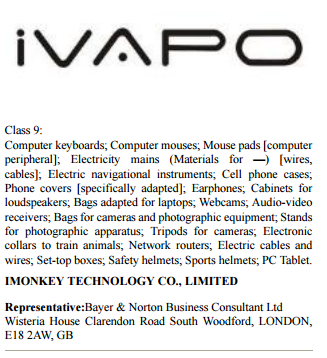 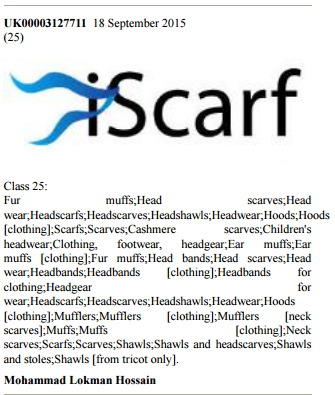 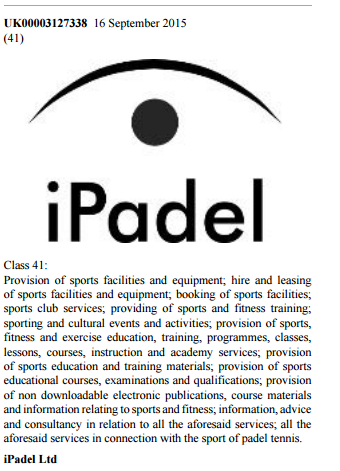 Quality name for a porter… 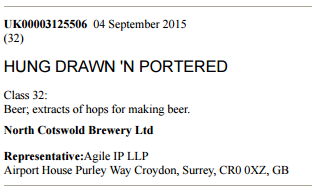 Looks like the Hard Rock Hotel group is coming to the UK. As far as I can see from their website, they don’t have a hotel in the UK at the moment, but it must be coming…Hard Rock Hotel London anybody? 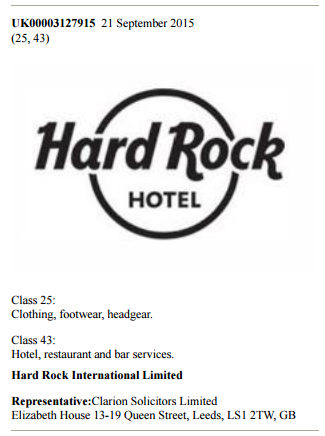 I do think this is a clever name for jewellery, but I can’t imagine ‘Lego’ are the type of company that lets anybody use the name lego for anything….so it will be interesting to see if they oppose this one. My money is on ‘yes;’ 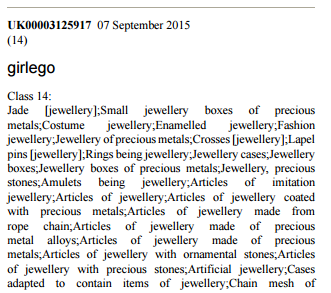 I don’t know precisely what it is, but I do know that is someone offered my some ‘Gentelmen’s Chuckaboo’, my gut reaction would be ‘get away from me…..pervert’… 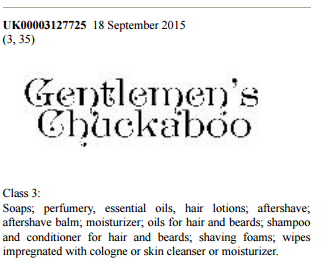 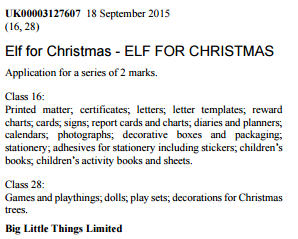 This is potentially quite interesting as clubbing giant Creamfields have applied to register ‘Dreamfields’ in the UK. Dreamfields seems to be one of their festivals, but doesn’t appear to have been held in the UK. So I’d say this means Dreamfields UK is coming soon! 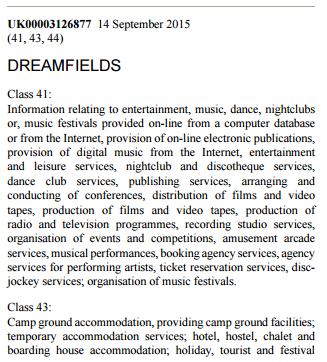 I’m assuming this isn’t OUR David Norris, though I’d imagine the senator would throw quite the bash! 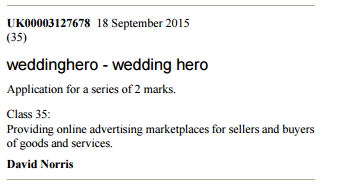 BT Sport have about a billion Trade Marks around the brand BT Sport – BT Sport Films, for showing films about sport, one assumes… 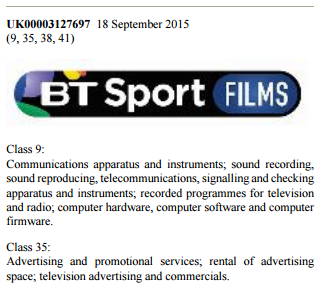